The moment N.C. State football has waited for finally arrives

As a flood of students poured onto the field at Carter-Finley Stadium after N.C. State’s 27-21 victory over Clemson last season, one figure seemed out of place in the mob of students.

Through the ecstasy and youth-fueled rave, an older man, with his son stood in awe at the scene.

“I’ve been coming to games here since 1969, and I’ve never had the chance to rush the field,” the older man beamed.

The glint of their N.C. State class rings caught the stadium lights, holding the luster of the moment within golden block-S on the top of each gold-and-ruby ring.

“But I’ve got to make it to midfield.”

Whether it was the shadows of the still-growing crowd, or the elated fervor of the moment, he couldn’t see that he had already made it there.

There’s something about this game, with its next chapter set to be written in front of a national audience. A constant and unbroken passion bleeding into the unforgiving malice of 60 minutes of ACC football.

The game hasn’t surpassed State-Carolina or Clemson-S.C. in its meaning, but unlike either recently it seems to carry consequence at every flip of the coin.

The Wolfpack came a possession away from doing-in 6) Clemson in 2017 with Ryan Finley at quarterback.

And while it hasn’t been the most evenly played rivalry by result, it has never come short on highlights – and disappointments.

For N.C. State the cathartic exorcism of ten years of orange demons washed away the pain of the past, even if only for an evening.

State didn’t complete a magical season after the win though.

Neither the Wolfpack nor the Tigers played for an ACC title last season. N.C. State faltered in road tests at Miami and Wake Forest, while Clemson fell to eventual-league-champion Pittsburgh.

N.C. State was unable to vie for their second 10-win season in school history after a cancelled bowl game while Clemson kept Dabo Swinney’s 11-year streak of 10 or more wins alive.

And then the loss of Zonovan Knight, Ricky Person Jr., and Emeka Emezie have left the Pack with an offense that is at-best serviceable – at worst pedestrian.

But things overall have hurled State into Saturday’s pending moment of destiny.

The Wolfpack used two touchdowns and an onside kick recovery to defeat North Carolina for the first time since Mack Brown was named head coach in Chapel Hill.

This year State avoided disaster doing just enough to escape East Carolina with a 21-20 win. The Pack had been only 1-3 in Greenville prior.

And the most recent in a streak of important home wins was a 27-14 victory over a power-five opponent in Texas Tech.

What awaits the Wolfpack now is the cash-it-all-in moment that this program pleaded for since Dave Doeren assumed his role in 2013.

State has not been featured on College Gameday since 2004 and has only seen the Saturday, primetime ABC light once since – as an under-manned, sacrificial lamb to 3) Clemson in 2019.

Even with each escalating moment for the Wolfpack, the national limelight on Saturday will burn hotter and brighter than anything this school has seen, maybe ever. And there’s no more fitting opponent that needed conquering.

This isn’t “Ponder put it on the ground” Florida State or the many hapless Butch Davis-led UNC teams. The other side doesn’t hold the want-to-be-back East Carolina Pirates or even the slow-mesh, read option Wake Forest Demon Deacons.

It’s the pinnacle of blue-collar, ACC football on full display.

Heck, there’s even a trophy on the line Saturday night.

There is no shortage of consequence either. For now the second time in as many years, the Wolfpack find themselves in the conversation for an ACC championship game berth. A victory would mean an inside track to representing the Atlantic Division.

But for the first time N.C. State has turned the page from the feel-good, maybe-they’ll-do-it team to a high-caliber threat to one of college football’s dynasties.

But the wait is over in just mere days now. The Wolfpack will receive every bit of attention and respect it has earned and craved over 10 long years of slow-but-meaningful development.

As the flood of Tigers pour down the hill and into Memorial Stadium on Saturday night, there will be many in awe of the scene.

The many generations of Wolfpack fans will watch on as the coin descends onto the paw logo at midfield.

No longer clouded by the toil and disappointment of seasons past or lost in the magnitude of the moment, N.C. State has made it here.

North Carolina runs out of time against Wake Forest 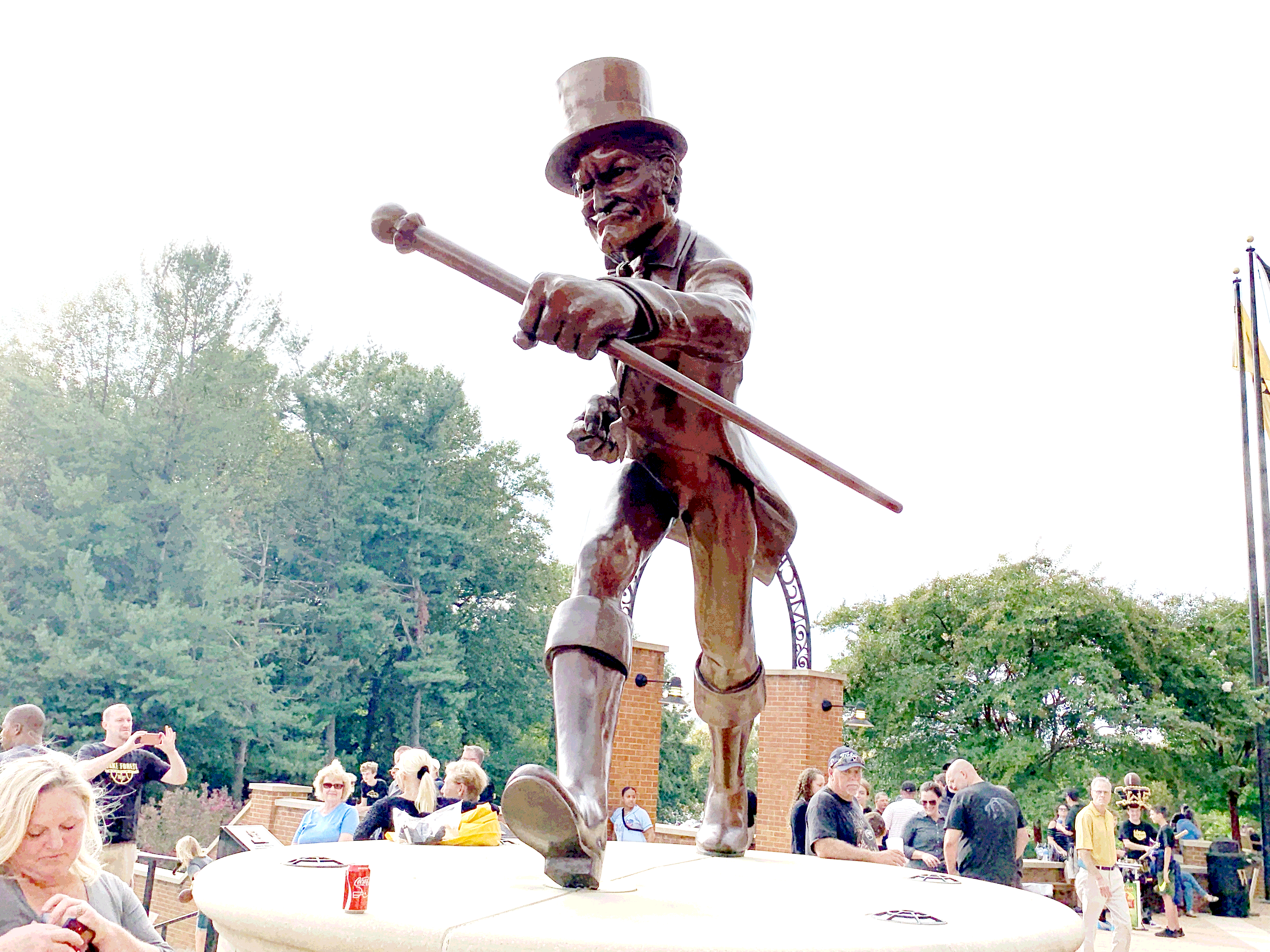 Fans gather at the deacon statue outside of McCreary Tower prior to kickoff. This is the first game North Carolina and Wake Forest have played since the 30’s that does not count in-conference.

WINSTON-SALEM, N.C.- Time runs in short supply for a lot of football coaches. And it’s something North Carolina Tar Heel fans might tell you they had one more second of before falling to the Wake Forest Demon Deacons 24-18 on Friday night.

“I saw the official wave one finger in the air, saying one second, and the next thing I knew they were running off the field,” Tar Heels head coach Mack Brown said after the game.

But whether or not Michael Carter gave his team one second to work with or not, North Carolina simply ran out of time to complete a comeback.

“It’s on me,” Carolina quarterback Sam Howell remarked, “everybody was playing hard on offense and I’ve got to be better.”

Howell and the Heels took 18-and-a-half minutes to secure the team’s first, first down, and the offensive struggles continued as Carolina went only 2-16 on third down.

Jamie Newman led the charge for the Deacons, carrying the ball 19 times for 78 yards and adding 214 yards through the air. The redshirt-junior from Graham (NC) was a part of every touchdown-scoring play, rushing for two scores and completing a 51-yard pass to Sage Surratt for another.

Surratt notched career highs in catches (9) and yards (169) in the game as the Deacons cruised to an 21-0 halftime lead.

“We brought great tenacity to that game, I was proud of our guys,” said Wake Forest head coach Dave Clawson.

However, the Tar Heels mounted a fourth-quarter charge.

“Win the second half, win the fourth quarter, win the game… it’s what we preach on the sideline,” said Tar Heel running back Michael Carter, “and we really believe that.”

Howell found Carter in the endzone to bring Carolina to within two scores and, after a Wake three-and-out, hit Dyami Brown for another six points. UNC converted a two-point play to make it 21-18 with 6:09 to go in the fourth quarter.

Wake Forest responded with a five-minute drive that ended in a Nick Sciba field goal giving the Heels only 69 seconds to work with.

“That drive was huge for us… we forced them to use their timeouts and they never got a shot at the endzone,” said Clawson.

“I would have loved to have had that hail mary,” smirked Brown, but Carter stepping out of bounds as the clock hit triple zeros never gave Carolina the chance.

The Tar Heels will face Appalachian State (2-0) of the Sun Belt in Chapel Hill next Saturday at 3:30 p.m.

Wake Forest will stay in Winston-Salem to face Elon (1-1) in their homecoming matchup Saturday at noon, looking to finish non-conference play at a perfect 4-0.